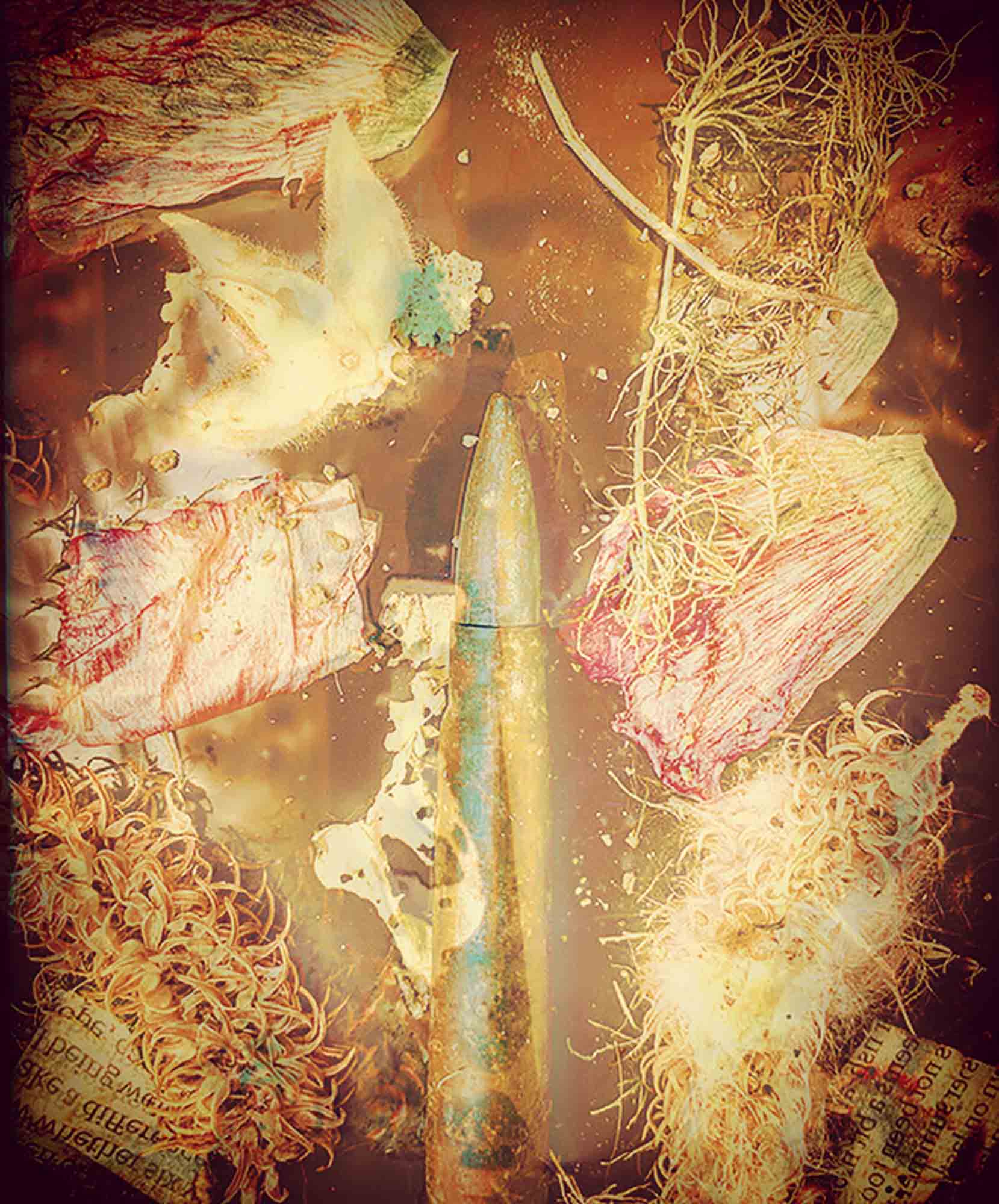 I like to delve into any immediate concerns and allow the creative process to unfold without the constraints of time or delivery.

We’re delighted to share this project and Q&A from Gina Glover. As a co-founder of London based gallery and education center Photofusion, Gina has had an enormous influence on British photography.

Her own photographic work has been equally important, spanning campaigning work in the 80s and photojournalism before moving on to a series of more than 20 residencies in hospitals. During these her work looked at reproduction, genetics and mental health.

Her latest work The Metabolic Landscape takes a look at human impact on the planet and is a collaboration with her partner Geof Rayner and daughter Jessica Rayner. It’s a fascinating combination of photography, essay and engravings.

Gina has chosen to share a personal project that she’s been working on for almost 40, and encompasses techniques that range from large format, to pinhole and most lately digital and chemigrams.

WHAT ARE YOU WORKING ON AT THE MOMENT?

A week before lockdown this March my exhibition, Art in ART: Symbolic Reproduction, Mirror Art and Reflecting Life, opened at Christchurch College, Cambridge. In this exhibition I drew upon the photographic archive of the Nobel prize winner in biology, Sir Robert Edwards, achieved for his trailblazing work in invitro fertilisation.

A week later it was closed to the public! It has recently reopened and I will take part in a conference called Ways of Working based on exploring Robert Edwards’ archive which is also held at this college.

I am also in the process of producing a book called The Hydrocarbon Forest, an environmental landscape project with my partner Dr Geof Rayner, a snippet of which was recently featured On Landscape magazine. We explore the implications of oil and gas industry methane emissions from over 14,000 active oil and gas wells and many more orphan or abandoned wells in the Allegheny Forest in Pennsylvania.

WHY IS PERSONAL WORK IMPORTANT TO YOU?

Personal work has always been incredibly important to me, being a way of testing out ideas through experimentation and exploring and uncovering personal issues. I like to delve into any immediate concerns and allow the creative process to unfold without the constraints of time or delivery. It has also allowed me to experiment and test different cameras and techniques without the results having to be successful.

With commercial assignments there is the pressure of delivery within a given time frame alongside the production of work that will please the client and fulfill the demands of their brief. This means one has to be willing to compromise and at times to be limited by where the work will be shown.

WHAT IS YOUR PERSONAL PROJECT – HOW DID IT COME ABOUT AND WHY DID YOU SHOOT IT?

My personal project Playgrounds of War is an investigation of discovered secrets, time and memory. It examines how a landscape has been shaped by war and aggression and how it has succumbed to the rejuvenating corrosion of time, weather and natural growth.

YOU’VE BEEN WORKING ON ‘PLAYGROUNDS OF WAR’ FOR SEVERAL DECADES, HOW HAS THE PROJECT EVOLVED DURING THAT TIME?

As a child in the English Midlands in the 1950’s I travelled by pony and trap to a deserted former secret WWII aerodrome, which later became a 1960’s Thor nuclear missile base, under the control of the US military. At the time I only appreciated the joys of family picnics and picking blue bells.

Three decades later this is where I live and Playgrounds of War has now become a four-decades project, where I continue to create, uncover and decipher this special place. The differing artwork it invokes reflects my concerns at any particular time.

In the 1980’s, I felt a responsibility for having children and bringing them into our world of war, famine.. and Thatcherism. At this time I was a founder of a photographic collective called the Photo Co-op, now Photofusion Photography Centre, in Brixton.

My focus then was the photographing of local Wandsworth activist campaigns. I also set up a picture library, receiving a grant from the GLC (Greater London Council- which was closed down in Thatcher’s time.) Playgrounds of War was something apart from my campaigning mode of photography where I could experiment with medium format cameras, produce fine art prints and depict my surrounding landscape, whose enormous historic impact I felt had been kept secret from me. 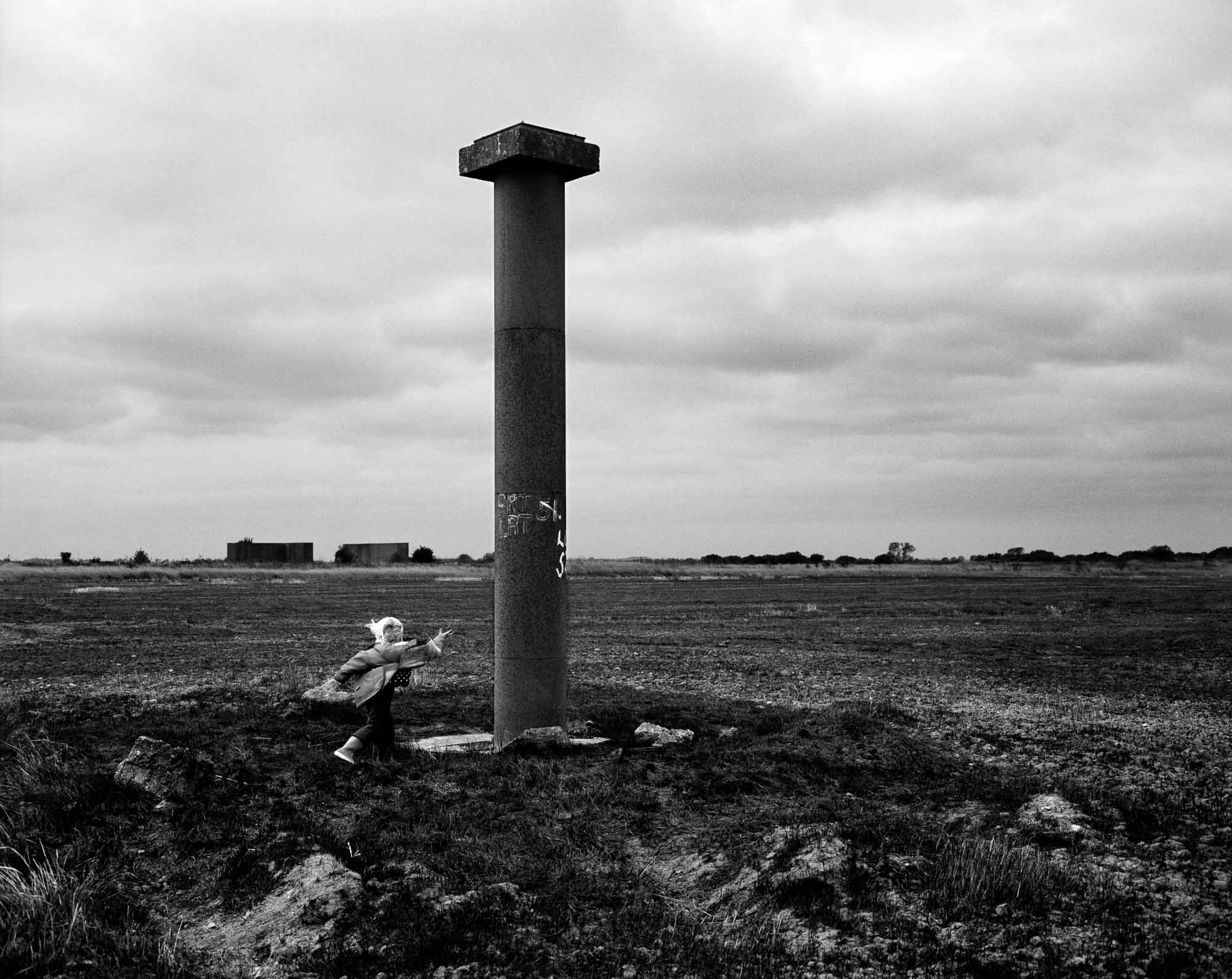 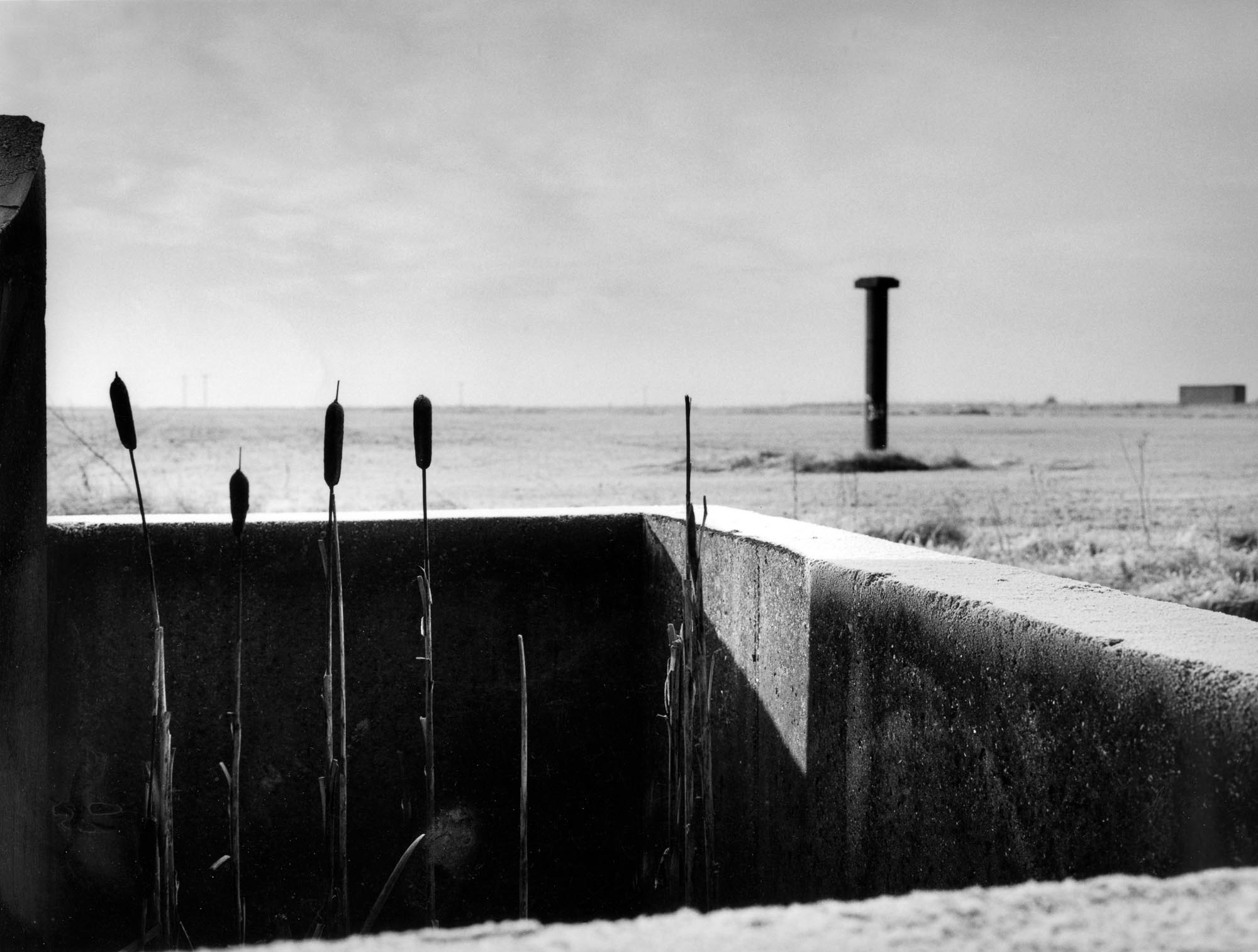 In 2000 I received a Millennium Arts Council Research and Development grant to make work with pinhole cameras. I began using such cameras, being interested in the enormous creative latitude they might offer, in particular to be able to stretch the boundaries of the photographic moment.

The necessary lengths of exposure mean that different qualities of light and the continuum of movement over time are captured on film. In the mid 1990’s I was fascinated by how the brain processes and interprets visual information.

In part this was due to my own situation. In the late 1980’s, I had suffered a severe reaction to anti-malarial drugs while on photographic assignment with Oxfam in Africa. As a consequence, I intermittently experienced various visual shifts, viewing the world either through an intensity of colour or else in shades of grey.

Using long exposures with a pinhole produces what might be experienced as the layering of light, creating an out-of-this-world feel. In using my Zero 2000 and Zero 618 multi format pinhole cameras the images I created could evoke a feeling of being in a civilization’s no-man’s land, despite being only half a mile from home!

Here I was in a potential nuclear waste land where nature was actively reclaiming concrete blast shields and missile launch pads and where the local farmers believed that the Cuban Missile Crisis might be Armageddon.

In making work it is always important for me to feel I am away from normal daily life and to be alone in a place where I can be completely absorbed by the environment. In this deserted place, I can be slightly fearful and therefore experience a slight adrenalin charge, this stimulates and helps me see things in more intense way. 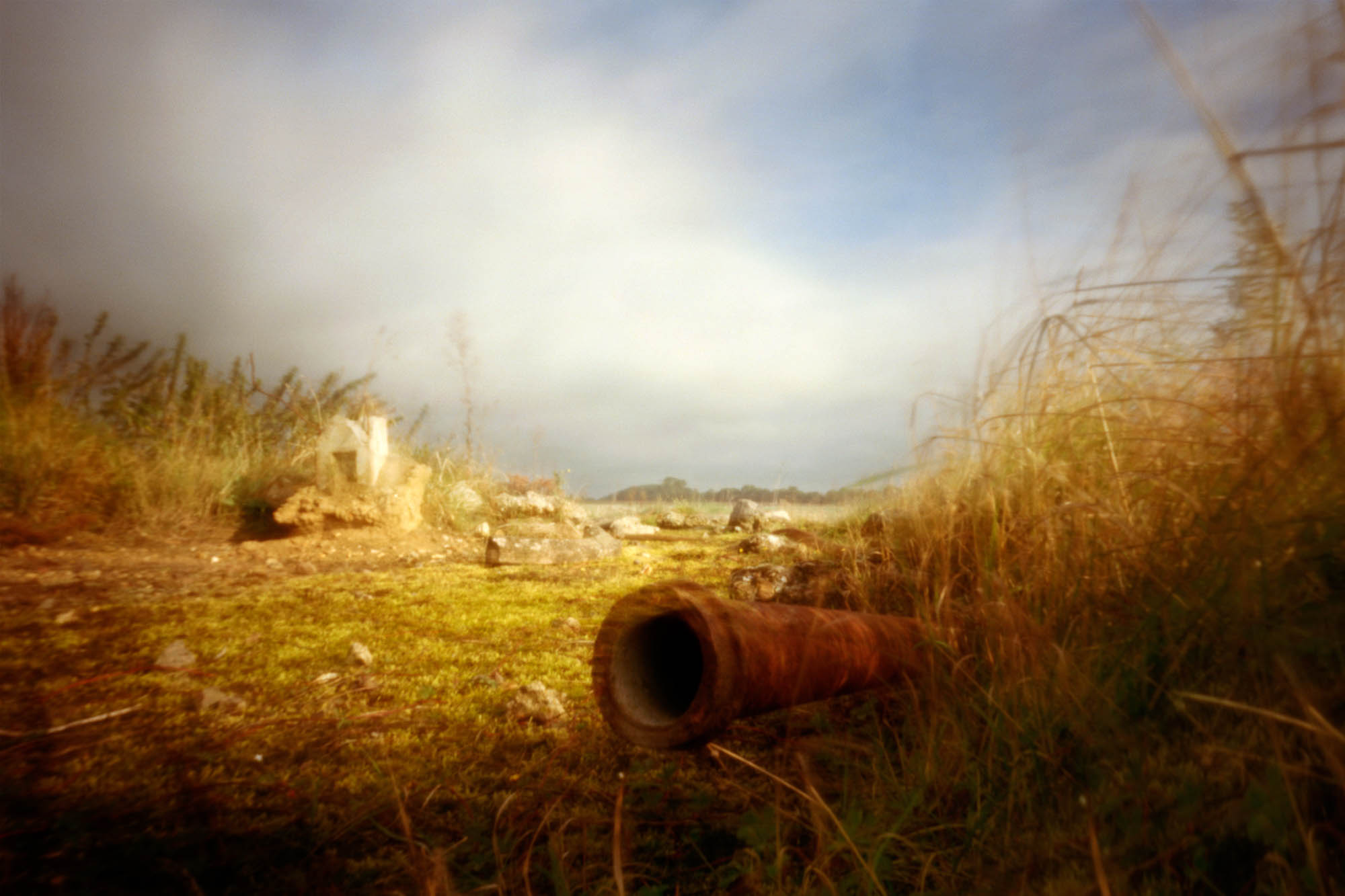 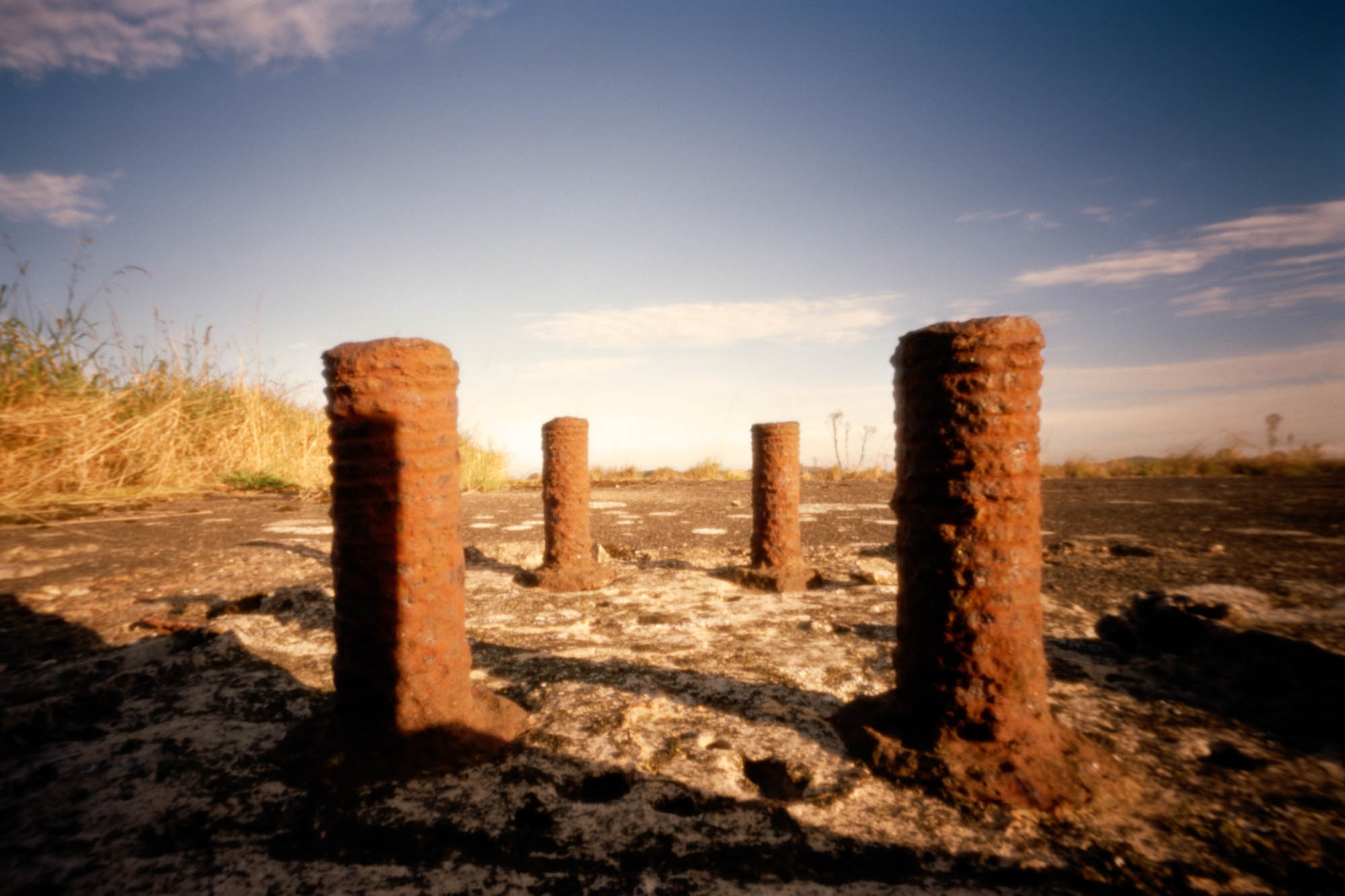 Throughout this project I have collect artefacts and stories from local farmers who were around during these eventful and frightening times. I have become an amateur archaeologist myself. Using a scanner I have photographed bits of bomber aircraft, war kit, shells, bottles, and other war detritus, all made on a black background which has given an air of importance and scientific authority. My most recent collection of scanograms, I’ve called The Entangled Bank. It’s simply a collection of discarded plastic bottles, the gifts of passing motorists alongside the road running besides the site. Using Darwin’s metaphor of nature’s ‘entangled’ complexity – mentioned on the last page of Origin of Species, they portray the human contribution to nature today. 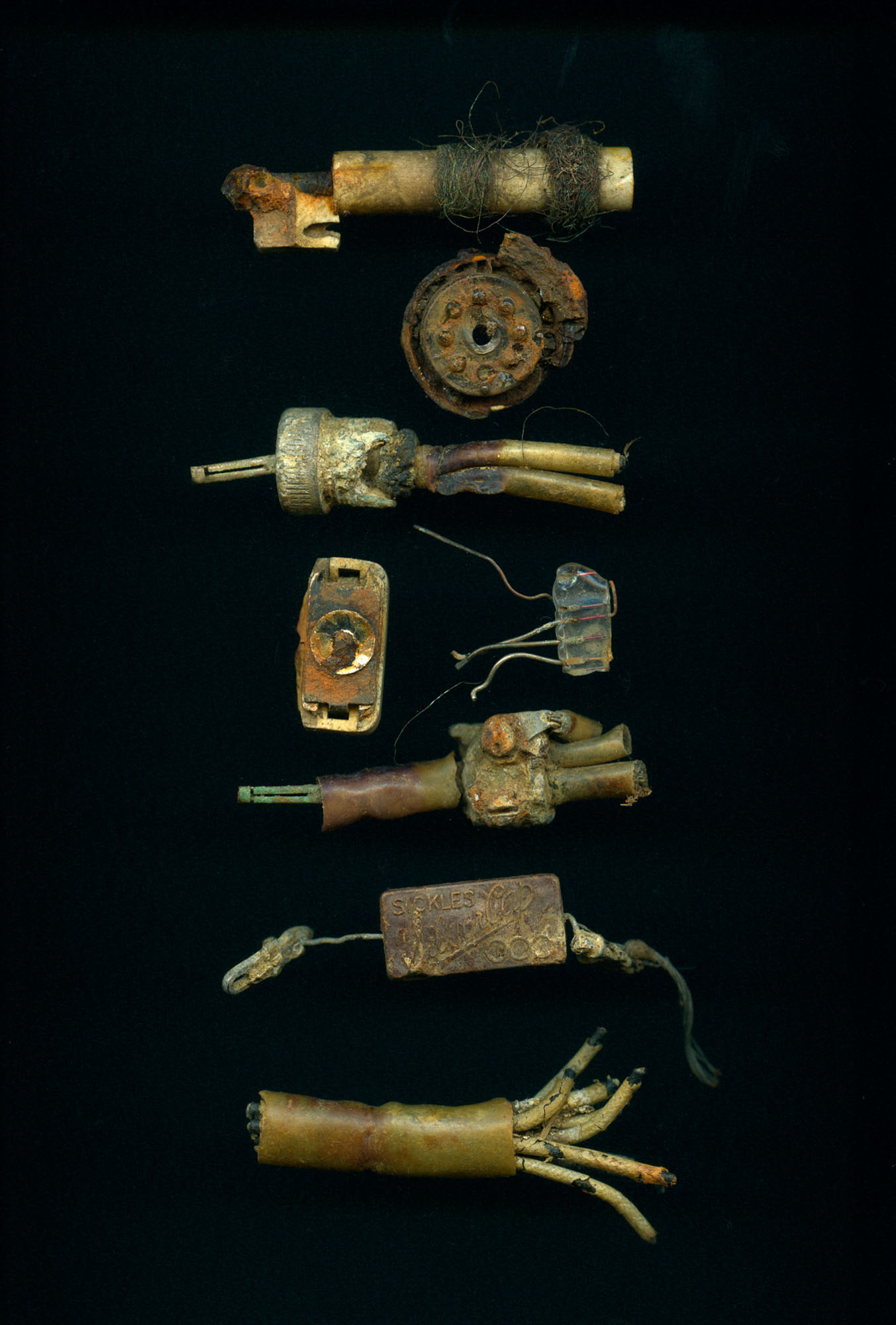 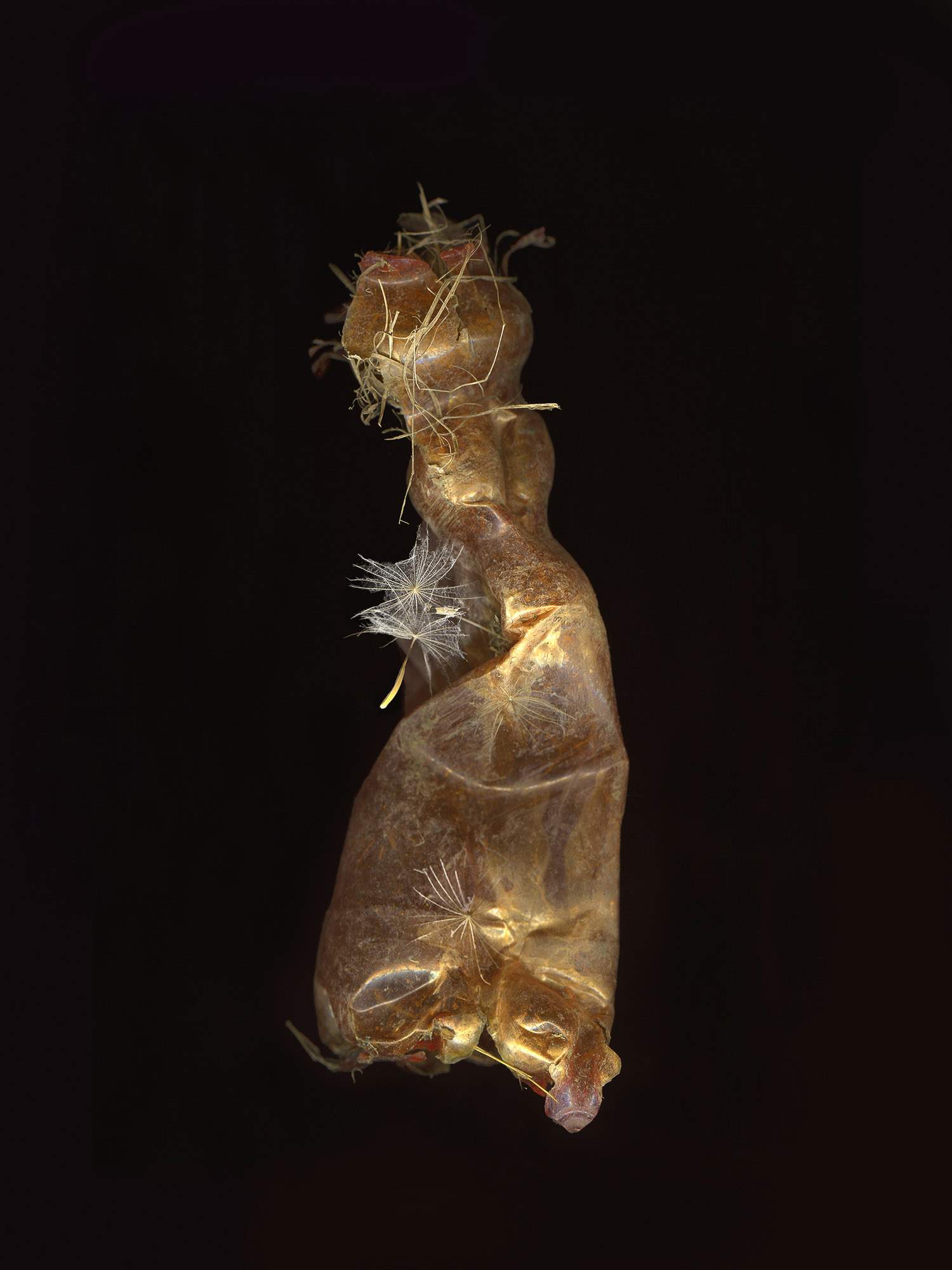 During the Covid lockdown, I have challenged myself to experiment with new creative visual object processes. At the beginning of lockdown I set up a studio, overlooking a pond in our garden. I found myself wanting to return to the simplicity of early photographic processes such as those which inspired Fox Talbot and Anna Atkins. These included camera-less prints, cyanotypes, lumen prints and chemigrams. I produced this series on date-expired photographic paper and on B/W Ortho film. These prints are both fixed with my urine (!) and later by the light emitted from a scanner. 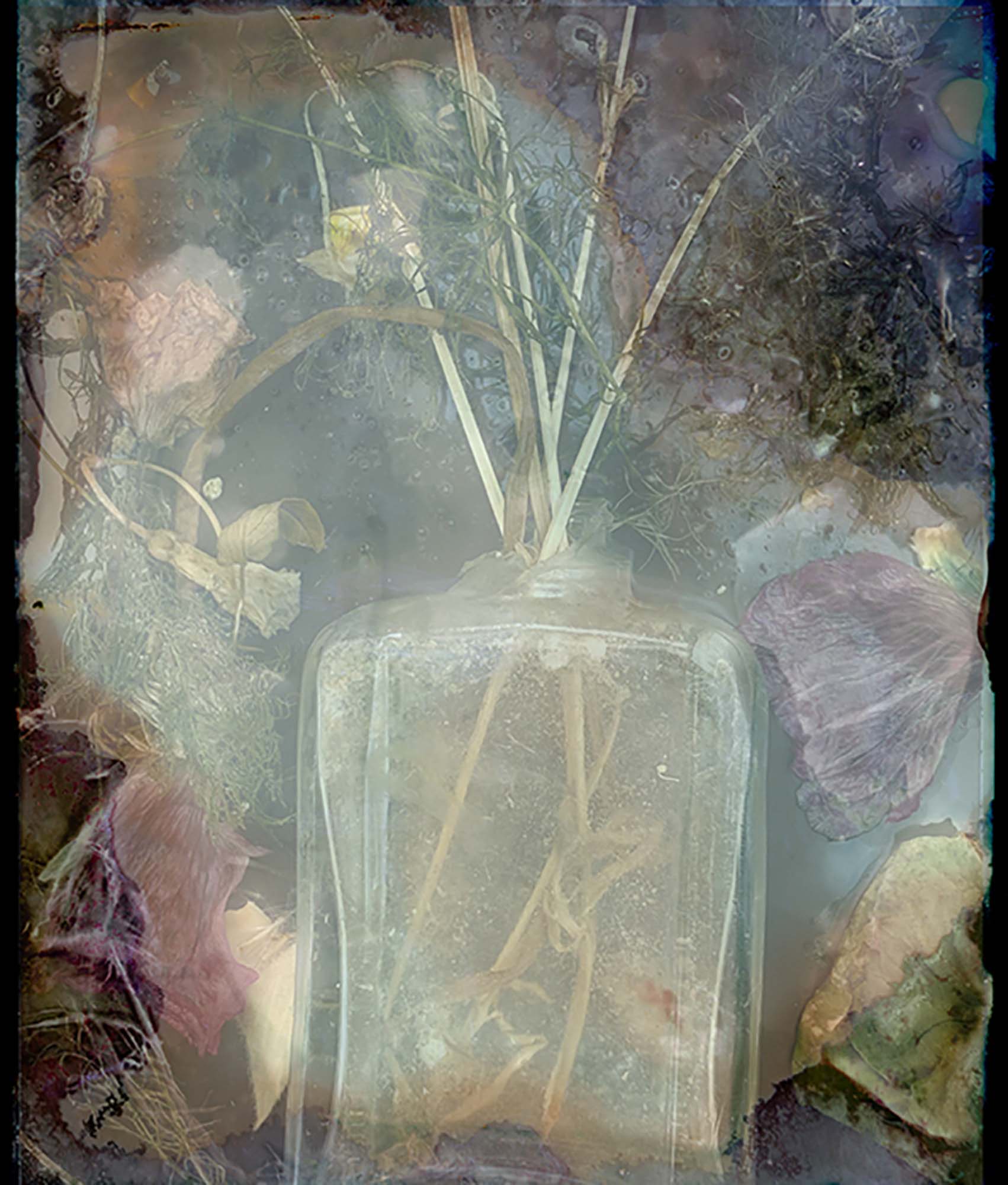 While making these prints I bundled up of leftover flowers and other artefacts to display in my new studio. A friend saw these and mentioned I should join Fiona Campbell’s online sculpture course.

What I realize I’m now doing is connecting the hidden world of my garden to its former life as a military site. I’m thus attempting to bring these different worlds together – my joy in nature and my fear of brutal conflict – but applied to our current time of paranoia, anxiety and risk. With no pressure on time and not working on commissions lockdown has allowed me a ‘real rediscovery of self’, and for personal re-invention. 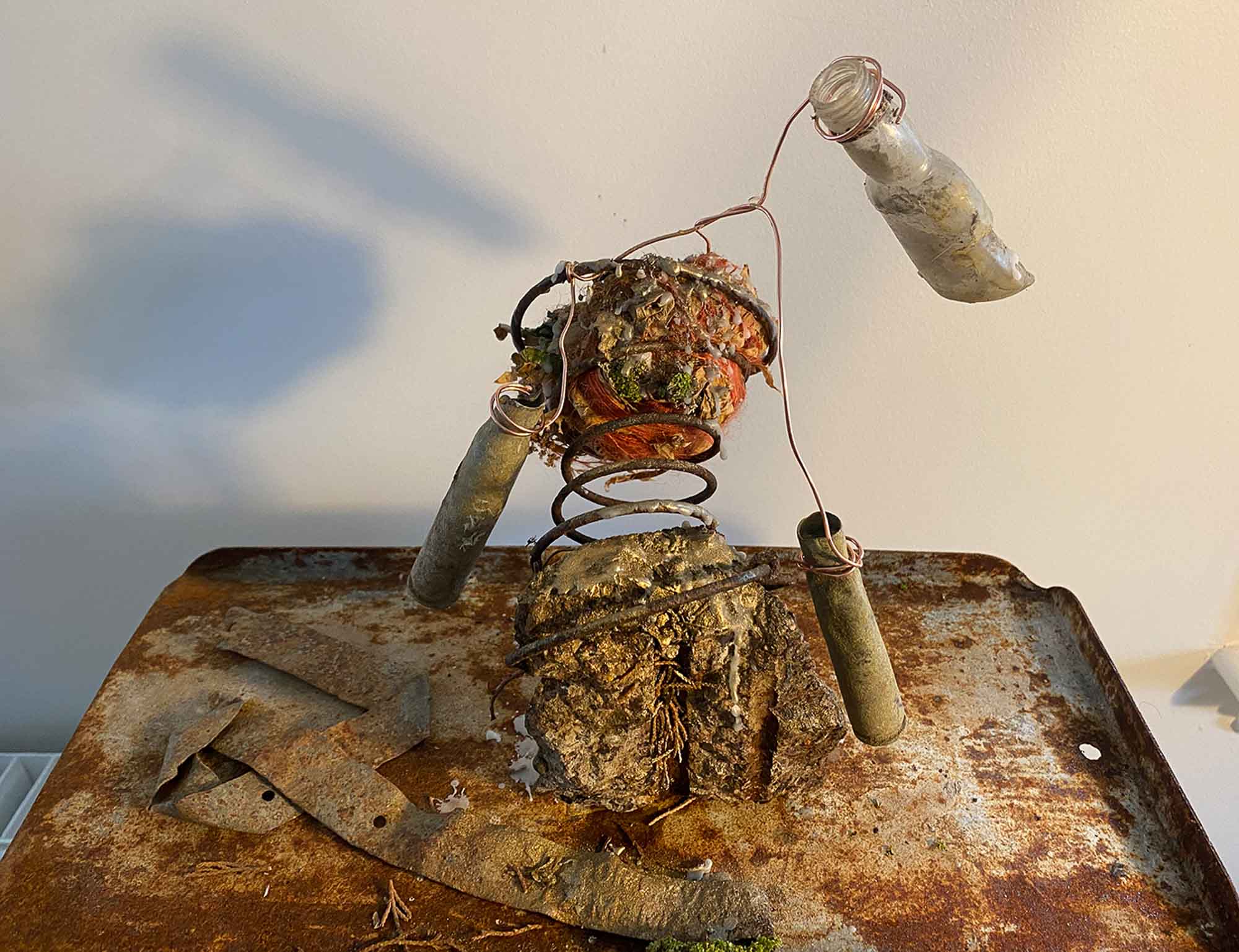 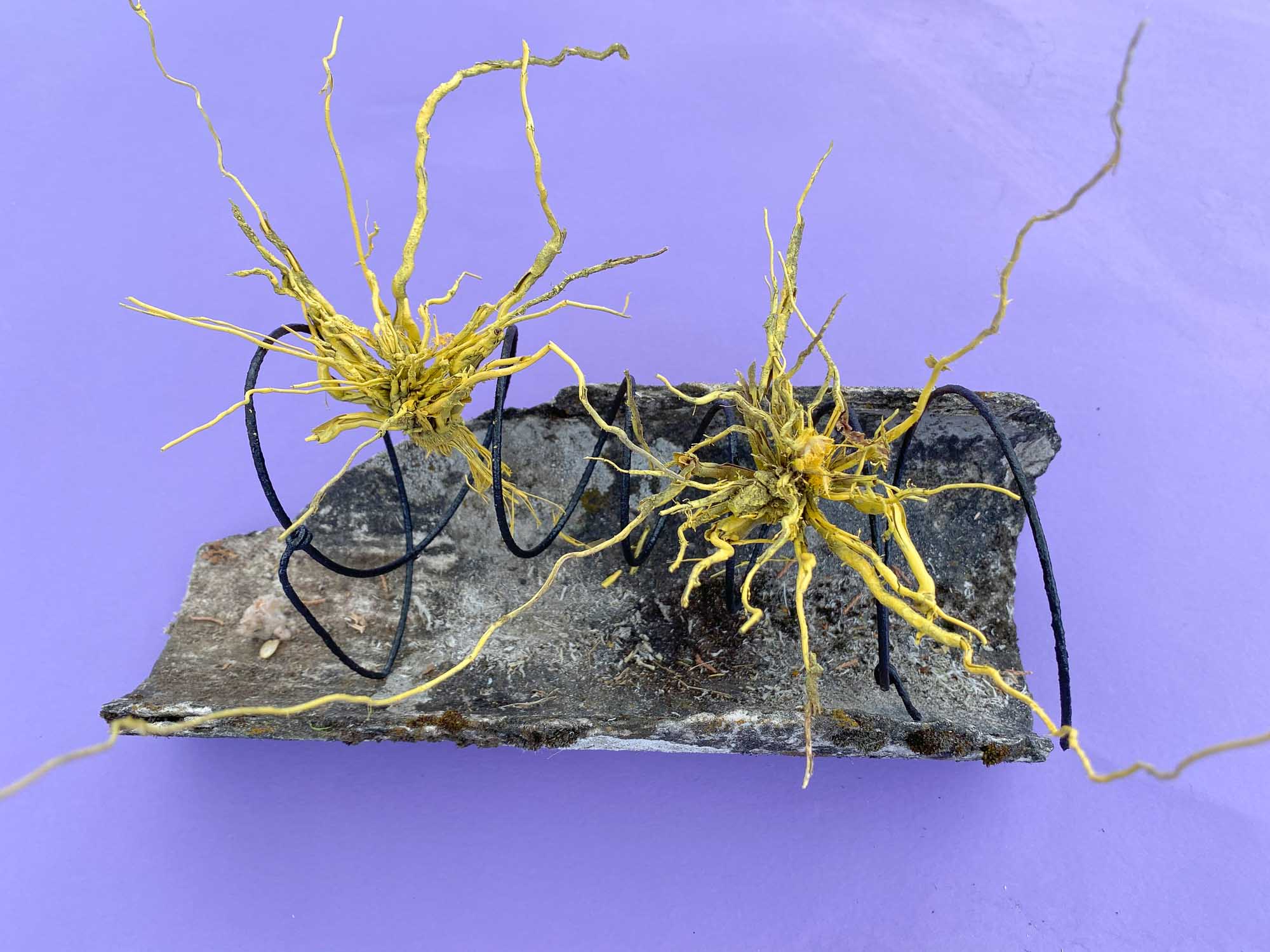